Labneh which is one of the most -loved types of cheeses with its soft and spreadable consistency is a favorite of the breakfast tables. Labneh can be used in many sweet and savory recipes is a kind of cheese with rich nutritious values. 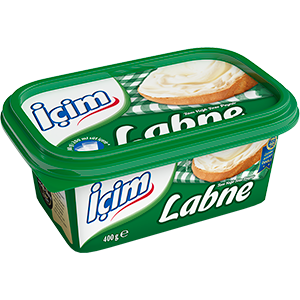 What is Labneh Cheese?

Labneh is made with pasteurized milk and yogurt culture and it is in the spreadable cheese category Indispensable of the tables labneh cheese preferred by people of all ages, is a nutritious cheese thanks to its rich calcium and protein content.

Featured with its unique taste and consistency as well as beneficial effects on health, labneh cheese adds zest at every meal of the day.

What does Labneh mean?

Labneh is the Middle East oriented spreadable cheese. It is called with different names depending on the countries such as labni, labneh, lebneh, and labaneh. The word labneh derives from Arabic “laban” which means milk. Some foreign sources also describe labneh as “yogurt”.

What are the Ingredients of İçim Labneh?

One of the most frequently asked questions of labneh lovers is: “How labneh is made?” Labneh which became one of the most-loved types of cheeses with its soft and spreadable consistency is produced on the second biggest production line of the world without human touch, under hygiene conditions. İçim Labneh contains cow’s milk, pasteurized cow’s milk cream, yogurt culture and salt.

100 grams of İçim Labneh contains about 200 ml of milk. It is an extremely nutritious product for children and babies with its high calcium content as well as giving zest to recipes with its much milky consistency. It is possible to create many recipes with this natural, nutritious, and healthy product that can be safely consumed by consumers of all ages.

How İçim Labneh Should be Consumed?

With its rich milk content as well as creamy and smooth texture, İçim Labneh is suitable to be consumed with jam and marmalade for breakfast. Labneh is a taste element for desserts such as cheesecake and tiramisu with its unique taste. It also can be used in many recipes of savory dishes such as pasta, pastry, bun, salad, soup as well as side dishes and sauces.

Labneh is a unique taste for people who are looking for tasty and practical snacks for any time of the day and breakfast with its smooth consistency.

What are the Benefits of Labneh Cheese?

Everybody, who fondly consumes labneh asking the question; “Is labneh cheese healthy?” İçim Labneh with its unique taste and soft consistency also provides many benefits for our health due to its high calcium and protein content and very nutritious. We can line up the beneficial effects of İçim Labneh on health as below:

What are the Benefits of Product Labneh for Children?

İçim Labneh, is a product that people of all ages can fondly consume with its nutritious ingredients and creamy consistency, particularly in this period when a healthy and balanced diet became much more important. It is also the biggest contributor of milk and dairy product needs of especially the children with its rich milk content and smooth consistency.

What are the Nutritive Values of Labneh Cheese?

Labneh comes forward with its rich mineral content in nutritive values. The nutritive values of İçim Labneh Cheese which have 200 ml of milk in 100g and due to that contains a high level of calcium and protein is as below:

Labneh product, which is preferred especially for baking desserts such as tiramisu and cheesecake thanks to its extremely smooth consistency and texture, officially proven its superior taste by getting qualified as ‘Remarkable Taste’ at the Superior Taste Award which was organized by International Taste Institute in Belgium.

Besides, in addition to this proof of taste, it’s also recognized with Gold award by World Cheese Awards and proven its taste once more.

İçim Labneh has officially proven its superior taste by recognized as “Remarkable Taste” at the Superior Taste Award which was organized by International Taste Institute in Brussels, Belgium.

Delicious and practical recipes
for your special events...